This blog post will be in English and Spanish for those in Spain who need information about this. Recently, I had a client in Spain. The company in Spain wanted to find out how to pay for digital services rendered in the United States.  If you work in International SEO or with international clients, this information will come in handy.

If you have a client in Europe, chances are they might ask you for your VAT or ID number. This is what you need to say:

Regarding VAT:  US digital marketers or web developers (service providers) do not need to levy taxes on services because there is no sales tax on “intangible goods” in the US, which includes services such as online tutoring, digital marketing, social media, online marketing, etc. Furthermore, we do not have or use a VAT number. However, the EU clients must themselves add the relevant VAT to their VAT invoice (import VAT), while at the same time deducting it as input VAT.

If I understand correctly, the VAT number is only a requirement for the European Union. As an American service provider, invoices for European customers state on the invoice. Americans living in USA pay taxes to the United States government. The income is reported as business income and/or as self-employment tax –because income under $80,000 from abroad is exempt from income taxes. The self-employment tax is credited to social security tax.

How to get paid?

Sometimes you might need to translate your invoice to the language or region you are doing business with, in my case that would be Spain, so I prepared two invoices, one from me and one in Spanish for them. It is quite simple to translate an invoice by keeping in mind only three important things.

Use Google translator to change the name of titles and marks on your English invoice. Using the Spain client as an example, instead of  writing “Invoice”, it will use the Spanish word for Invoice: “Fractura.” Instead of “Amount” you write “Cantidad.” Total is the same “Total.”  See Spanish Invoice sample below.

2. Taxes and how to use VAT

Make sure that aside from including your international client’s address, you also include the VAT number. This number is used in the European Union when invoicing for services rendered within each EU country. In other words, if someone in Spain is invoicing another business entity in Spain, they won’t use a VAT, they will use an IVA which, in  English, means TAX. But if the company in Spain invoices someone in Germany, they use VAT.

Here is a map of countries of the European Union

As you can see, VAT (international) and IVA (local) are similar to a US TAX ID NUMBER, but in Europe, they use two numbers because it is a common practice within the E.U. to do business within its own international countries.

In contrast, when you are a self-employed consultant in America, you don’t need to provide your European client with tax ID number especially if the amount is less than $80,000. For this reason, on the invoice, you make sure you write (under from section: VAT # Not applicable or in Spanish VAT # No Applicable. Also, there are no U.S. taxes on non-tangible products such, as in this case, services rendered over the internet.

3. Get the currency symbol placement in the correct location (EXCEL & GOOGLE DOCS)

The placement of the € symbol is based on what people have done with their old currency before the European Union was formed. So for example, in Ireland and Britain, the currency is placed before the number, e.g. £6.86. Others, like Spain, place the € symbol at the end of the currency  e.g. 5.43£. Other countries; did this too, e.g. Austria, Netherlands, Malta, Cyprus, etc.

.
How to place the Euro symbol to the right on MS Excel

Below are the visual steps: 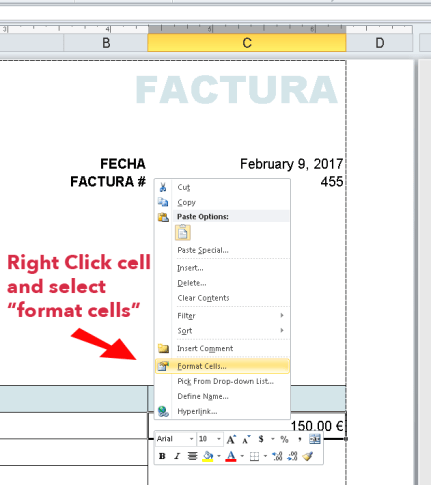 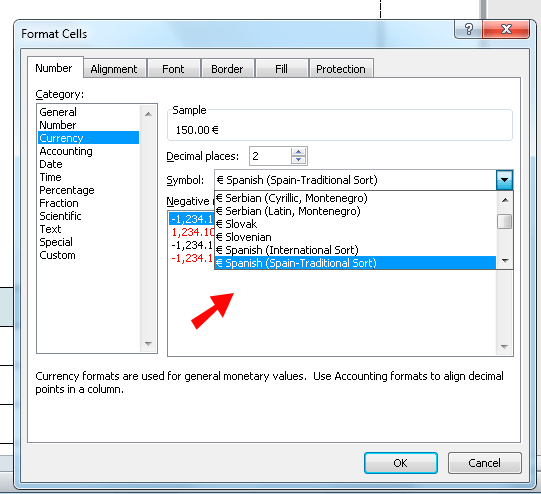 See step by step animation below

3. Get paid and invoice with Paypal

Once you have the invoice ready, go to your Paypal account, if you don’t have one, create one for free at paypal.com, and then make a simple invoice request by doing the following;

a) Login into your PayPal

d) An invoice page will open up. Type your client’s email and the rest of the information.

Important: Do not forget to attach your Excel document and choose the correct currency code for the transaction. 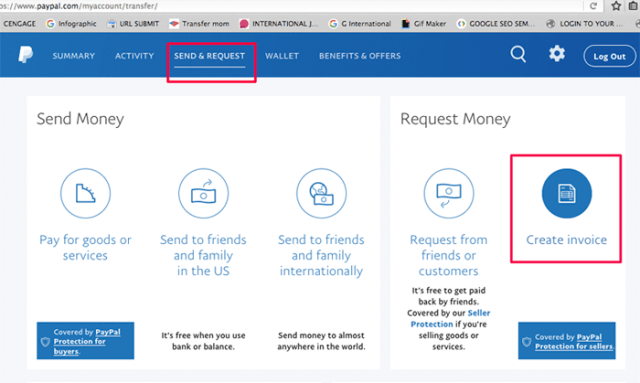 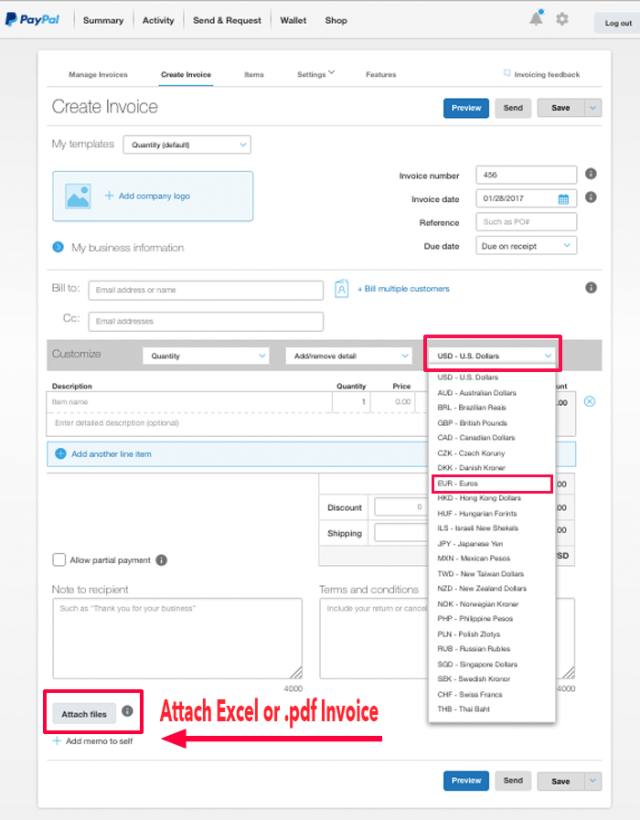 IMPORTANT: Don’t forget to type your excel invoice number on Paypal, otherwise Paypal will auto generate one for you, and you can end up with two invoice numbers.

Google Document Sample For an European Client [below]:

Download Free Google Docs Sample of how to invoice an International SEO client. 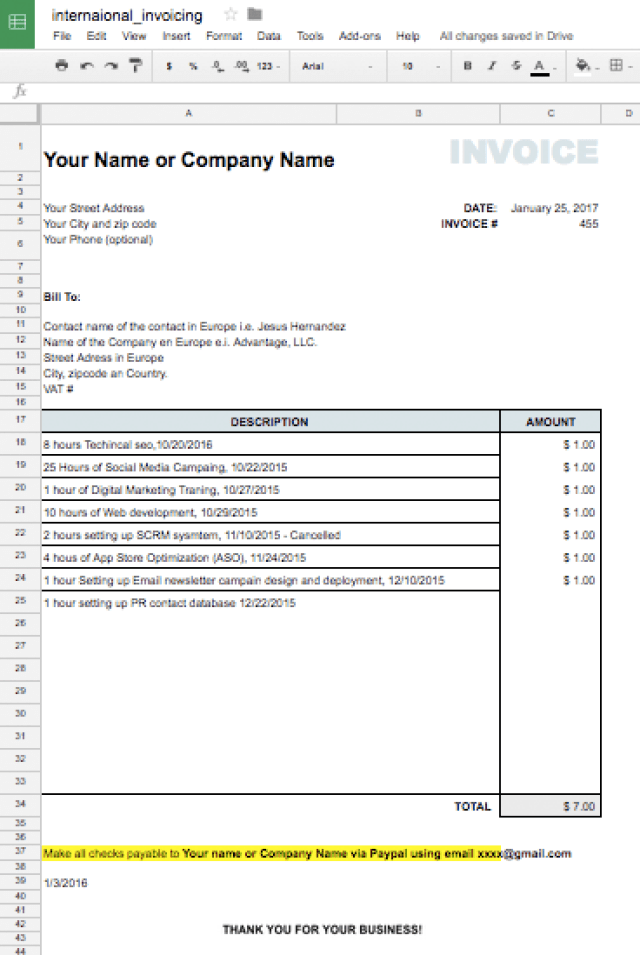 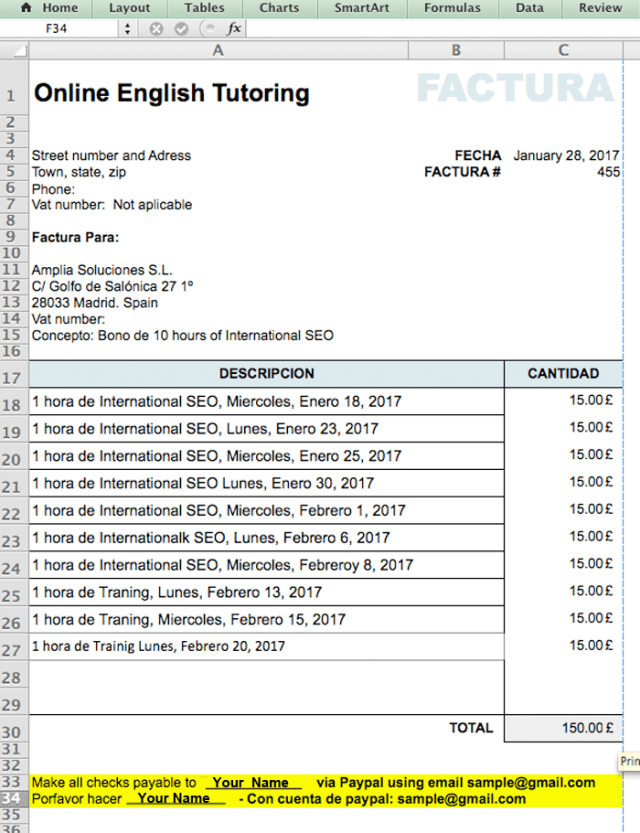 One thought on “Invoicing an International SEO Client in Europe”